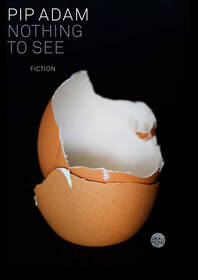 Nothing to See published in Australia by Giramondo Press

​It’s 1994. Peggy and Greta are learning how to live sober. They go to meetings and they ring their support person, Diane. They have just enough money for one Tom Yum between them, but mostly they eat carrot sandwiches. They volunteer at the Salvation Army shop, and sometimes they sleep with men for money. They live with Heidi and Dell, who are also like them.

It’s 2006. Peggy and Greta have two jobs: a job at a call centre, and a job as a moderator for a website. They’re teaching themselves how to code. Heidi and Dell don’t live together anymore, and Dell keeps getting into trouble. One day, Peggy and Greta turn around and there’s only one of them.
​
It’s 2018. Margaret lives next door to Heidi and her family. She has a job writing code that analyses data for a political organisation, and she’s good at it. Every day she checks an obsolete cellphone she found under her bed, waiting for messages. She struggles to stay sober. Then, one day, there are two of them again, both trying to figure out where they have come from.

Nothing to See is a compelling, brilliantly original novel about life in the era of surveillance capitalism, when society prefers not to see those who are different, and the line between reality and simulation feels dissolvingly thin.

‘How the fuck do you make a quiche?’ An extract from Pip Adam’s new novel in The Spinoff